So, onto the post, how have I changed in an effort to "Get Fit, Feel Epic" and what caused me to change?

After battling with my doctor in January 2012 to be issued with another set of birth control pills I realised that it was time that I started to do something about my weight (if your BMI is within the obese zone you're not supposed to be issued the pills I take as it can increase your risk of blood clots which is considerably worse if you're obese). At that time I weighed 14 stone 10 lbs and, at the height of 5'8", I was firmly placed into the obese category with a BMI of 31.32, as I sit here today I'm now 12 stone 2 lbs (I imagine +2lbs if I were weighed at the doctors due to wearing clothes haha!) with a BMI of 25.85, putting me just into the overweight category.

Throughout my years at school I was self-abusive in a number of ways, I won't go into details but one of the ways I abused myself was to restrict food. I was within a group of friends who were extremely concerned about looks and, to be frank, I was the biggest one within my friend group and was made to feel as though/felt as though I wasn't worthy of being friends with them. This led to extreme restriction of food - I normally wouldn't eat anything other than my main meal at home (so that my parents wouldn't realise) and anything other than that which I ate tended to be junk. This also caused me to binge massively when I couldn't cope with the feelings of hunger any longer and, again, would inevitably be junk like crisps, chocolate and sweets.

After leaving home at 16 similar feelings of not being worthy combined with guilt meant that I revisited this behaviour, particularly as I had complete control over my food for the first time, meaning that I went extremely overboard and put weight on, on top of what I wanted to lose. I never weighed myself whilst at school but I'd guess that I was around 13 stone then so put on nearly 2 stone through my periods of extreme binging.

I quickly came to realise a few months after my appointment in January when questioning how I got to be so heavy (after the initial period of denial) that there were many mental issues which I needed to address - I needed to learn to cope with the guilt associated with leaving home, begin to value myself as a person and do more things which made me happy as these would all be part of the process towards better health and, ultimately, a better body.

So, how have I acheived my weight loss so far? As I mentioned above I essentially learned how to be selfish and make more time for myself in order to improve my mental state - I started taking care of my appearance more by introducing something which resembles a skin care routine which helped, alongside a better diet, to clear up acne which had developed and had really got me down. I made time to read books, watch films and I began to get involved in the blogging community as a means of keeping myself accountable and to create an outlet for my thoughts.

I rid my apartment of all of my typical binge foods (big packs of sweets like Maltesers, biscuits, ice cream, 'sharing' bags of crisps) - I have only eaten ice cream once (on my birthday) since July 2012 at least - got myself an exercise mat and some hand weights, as well as Jillian Michaels' 30 Day Shred and Davina's Ultimate Target as I don't have enough money for a gym membership, nor is there anywhere suitable for me to run as I live in the middle of a city. Initially I found it extremely difficult to motivate myself to exercise but I've found that getting up an hour earlier in the morning and just getting it done works best for me, once I get home from college I just want to relax or have numerous other errands to run!


I've cleaned up my diet substantially and always eat three meals a day, I cannot stress enough how important this is - even if you just have a banana for breakfast because that's all you can manage have it. You won't get the same cravings for sugary/salty foods when you have a full stomach. That's one of the main things I've learned - food isn't the enemy - bad food is. This isn't to say that I never have any foods which aren't healthy, I often have dark chocolate and occasionally crisps, but I don't have all of the foods I enjoy every week (or every day!) any more and I still feel as though I couldn't trust myself with ice cream in the freezer. I can, however, trust myself with a packet of biscuits in the cupboard - so I've learned how to discipline myself and, in doing so, eat in a much healthier way.

I feel as though I should also mention the fact that I've done this on an extremely tight budget - myself and my partner are currently supporting ourselves through benefits and a portion of the money that the government deems you require to live is going towards our rent as housing benefit doesn't cover it entirely (even though we live in a one bedroom flat in one of the cheapest cities to live in). I can't stress enough that losing weight is possible, even with a limited budget - if you've got a computer there are plenty of sites you can access which can help you to know what is truly healthy and what isn't, as well as several good exercise routines which require nothing more than yourself on YouTube. It is important, however, if you're on a limited budget to shop around. My partner and I set ourselves a budget of £50 a week to be spent on food and other household essentials which we take out in cash at the start of the week and don't go over unless it's a complete emergency, clearly this means that we have to be careful where we shop. Generally we shop in Aldi for general essentials, including fruit and veg and often meat now that we've discovered their prices are fairly reasonable but we always check the reduced section in Tesco where there are some really good deals too!

As a result of these changes I feel so much more confident in myself, I still have weight to lose as my goal is 10 stone 7 lbs (although I'm more focused on how I look than my actual weight), but rather than noticing all of the things I want to change I often find myself looking at certain parts of myself and thinking - do you know what, well done. It has improved my relationship with my partner, my family and my friends and although I'm aware that there are still some parts of my mentality which need working on, I am a much healthier person all round than I was at this point last year. Although I may not be 'there' yet I'm still so pleased with the progress because at the end of the day this (which I'm extremely nervous about posting - and yes I am sweaty from working out - but, here we go)... 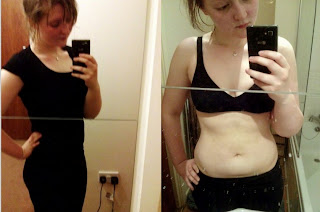 Is a lot better than this... 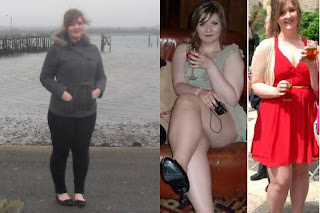 Hi! I'm Ria, a gap year student with the aim to fit into a size 12 dress before reaching uni and get healthier in the process! :)